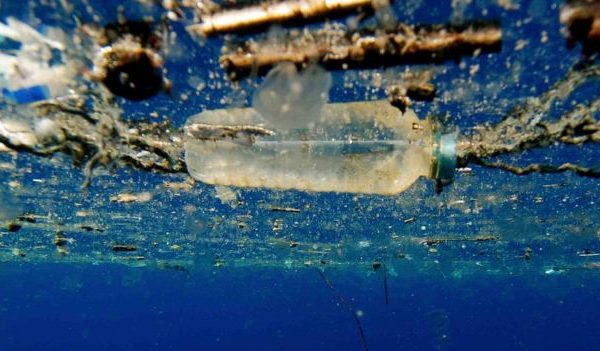 The Revolution in Waste Management: A Bacteria Devouring Plastic

Scientists have managed to improve the existing in nature enzyme, which is capable of decomposing some of the most common polymers that pollute the environment.

The most common plastic material – PET, or polyethylene, – which is used in the production of bottles, remains unchanged for hundreds of years in landfills. It decomposes extremely slowly under the influence of natural factors.

The modified enzyme, labeled PETase, begins to decompose this polymer within a few days. This could lead to a revolution in the recycling of plastics.

Only in Britain within a year about 13 billion plastic bottles are purchased, of which more than 3 billion are never disposed of and are found in landfills.

Find in the dump
Initially, this enzyme was found in Japan. It is a product of the life of the bacterium Ideonella sakaiensis, which devours polyethylene PET as the main source of energy.

Japanese scientists reported in 2016 that they discovered a variety of this bacterium in the plant for processing plastic bottles in the port city of Sakai.

“The PET polymer began to appear in huge quantities only in the last 50 years, and this is not a very long time for the development of bacteria that are capable of absorbing this artificial material,” says Professor John McGian from the University of Portsmouth, who participated in the study.

PET (polyethylene terephthalate) belongs to the group of polyesters, occurring in natural conditions.

“They are present in the leaves of plants,” says the professor, “for millions of years, bacteria have developed that feed on such polyesters.”

However, the discovery of a bacterium capable of processing PET polyethylenes was a surprise for biochemists. An international group of scientists was formed, which aimed to determine the nature and evolution pathways of the PETase enzyme.

Understanding the molecular structure of this enzyme, scientists noted that the effectiveness of PETase can be improved by making changes in its surface structure.

Rightholder illustrationsH LEE WOODCOCK
Image caption
Model of the molecule of the enzyme PETase allowed to improve its efficiency
This indicates that the naturally occurring enzyme is not optimized, and that it is possible to improve it.

The PETase enzyme was also tested on polymers of the PEF class based on biomaterials of plant origin, but also very slowly decaying in vivo.

“We were struck by the fact that this enzyme has an even better effect on PEF polymers than on PET polymers,” said Professor McGeean.

Analysis – David Shukman, BBC Science Department
The research team at Portsmouth University includes graduate students and even students, and when I visited their laboratory, I could not help sharing their enthusiasm. They know that the invention of the PET-class polymer required great efforts of the chemists, and they are proud that they managed to find a way of its accelerated decomposition. This polymer is used in the production of billions of plastic bottles worldwide. The current generation of young chemists is aware of the problem of plastic contamination and is making every effort to solve it.

However, there are many obstacles to the transformation of this discovery into practically applicable technology. First, it is necessary to develop methods for the inexpensive production of such an enzyme on an industrial scale; secondly, it is necessary to obtain reliable methods for its application and control over its operation.

Recycling of a closed cycle
Complex polyesters obtained during the processing of oil are widely used in the production of plastic bottles and clothing. The existing methods of their utilization are based on a decrease in their quality at each stage of processing. For example, plastic bottles first turn into fibers used in clothing production, then in the production of carpets, after which they often end up on the landfill.

Rightholder of illustrationDENNIS SCHROEDER / NREL
Image caption
The modified enzyme PETase for several days decomposes plastic waste – the image from the electron microscope
The PETase enzyme reverses this process, turning complex polyesters into simpler molecules that can be re-used.

“Such molecules can be used in the production of other polymers, thus excluding oil from the process … In this case, we create a closed cycle of production and processing, which is necessary for complete utilization,” notes Professor McGian.

This enzyme is still far from industrial use. It is necessary to accelerate its action – at present it takes several days. In the case of industrial use, recycling with its help should take hours, not days.

But Professor McGian hopes that the results mean a major shift in the problem of recycling plastic waste.

“At present, there is an urgent need to reduce the volume of plastic wastes that end their way in landfills or enter the environment, and if we manage to apply new methods, we will get a solution to this problem in the future,” the scientist says.